Due to the recent Outbreak of COVID-19 our office has installed UV HEPA filters in every treatment room as well a mandated that all staff and patients wear masks to the office. For those who are unable to make it to their appointments or are sick in any way we offer our new telemedicine service as well where we can diagnose and treat your problems from the comfort of your home 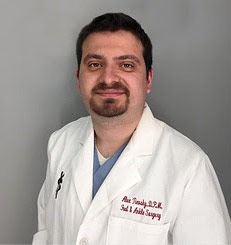 Over the years Dr. Tievsky has set himself apart from other surgeons with his caring attitude and meticulous surgical technique.  He is regarded as one of the top surgeons in the country for treatment of collapsing arches via a minimally invasive surgery. He lectures both nationally and internationally and teaches other doctors on how to skillfully perform many surgical techniques. He was honored to be awarded the title of Center of Excellence from Gramedica in the implantation of HyproCure stents.

Dr. Tievsky was great. He had to do a numbing procedure on my toe, and I told him I was scared of needles, but he made the process extremely transparent and virtually painless. His bedside manner is great – very personable, likes to crack jokes to put patients at ease, but very professional at the same time. Highly recommend.

Dr. Tievsky is an excellent Doctor. Extremely friendly and professional, and goes above the call of duty. Not one of those doctors that quickly checks you and rushes you out of the office, takes his time with his patients to explain many things, and you never feel rushed. Probably the best doctor I’ve ever seen. Can’t recommend him enough.